Patrik Jansson, singer, guitar player, drummer, composer and producer, was born in the small town of Gävle in the middle of Sweden. He started playing drums at an early age and in his early twenties he moved to Stockholm to study music and pursue a career in the music business. He also started playing piano, bass and guitar and got more and more into songwriting and playing the blues. 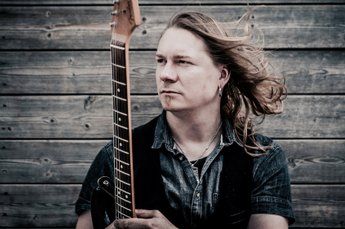 Patrik Jansson Band was formed in Stockholm, the capital of Sweden in late 2007. After playing drums in various blues bands and jazz combos, hard-rock and metal acts for several years, Patrik decided it was time for another challenge. He picked up the guitar and started playing and singing in hopes of developing as a songwriter and a musician. “I’ve always loved to learn new things” he says. With a passion for heavy Texas blues and with a new mission in life he started looking for musicians to play with. “I had a pretty clear idea of what I was looking for” he says, “I wanted to play blues with a more modern approach. Blues is supposed to feel fresh and alive, it’s a most vital music in my opinion. In short I wanted to play the kind of music that I would like to hear myself and that I think a lot of other people would like and appreciate”.

In the beginning of 2011 PJB released their self-titled critically acclaimed debut album on the Sneaky Foot Records label and they played extensively all over Sweden. The music could best be described as a mix of Stevie Ray Vaughan, Johnny Winter and Buddy Guy to name a few of the early influences.

After some line-up changes it was time to start writing songs for the follow up to the debut album and in late 2013 the band entered the studio to record “Here We Are” (2014) their second full length album. With guest appearances from Mikael Fall (harmonica world champion 2013) and the great Swedish female blues singer Lisa Lystam, “Here We Are” is an album full of great songs and great performances. Blues News, Germany wrote, ”Yes, this CD has style, charm, that certain something and if someone asked me for track to play, I would say: play the whole album! Again and again!”. Blues News, Norway rated the record 5 out of 6 and the American Blues Blast Magazine wrote, ”Patrik Jansson Band announces “Here We Are” with as much vigor as the late, great Stevie Ray Vaughan”.

2015 it was time for another lineup change when drummer Martin Forsstedt, bass player Thomas Andersson and organ player Gustaf Andersson joined the band and late 2016 they hit the studio to record So Far To Go. The wide range of the new material was a clear statement that PJB didn ́t have any limitations for their music and following their own recipe they once again proved that they knew what they were doing. The album is full of melodic blues and blues-rock where influences of classic Chicago and Texas blues like the music of B.B. King and Freddie King is fused with the more modern soul, blues and blues-rock of Robert Cray, Stevie Ray Vaughan and Joe Bonamassa. It was released in august 2017 and once again the critics were delighted. Blues Blast Magazine, U.S.A. wrote ”Guitar based rock and blues-rock doesn’t get any better than this. From the high energy cuts to the slow pensive moods this music deserves to be heard.” and Blues Magazine, Netherlands wrote ”There is just no bad song on this album. Only high quality bluesrock!”. ABS Magazine, Franc ”This singer, guitarist, composer and producer of Swedish origin has an indisputable talent to play the blues” and BluesNews, Germany gave the album 5/6 saying ”Now, Jansson has delivered the sequel to "So Far To Go" and I'm just as excited as then. Why? Because he once again made his version of the classic Freddie and B.B King just like the followers Robert Cray, Stevie Ray Vaughan and Joe Bonamassa”. So Far To Go got a lot of airplay on radio in U.S.A, Australia, U.K. Italy, Spain and Poland.

2018 PJB completed their second successful European tour and a did several festival appearances, including one at the Grolsch Blues festival which was recorded and broadcasted nation wide by the German Deutschlandfunk radio.

In 2019 Gustaf Andersson was replaced by Lars Ericsson, a piano player with extensive jazz and blues background giving the band a more sophisticated sound and it was time once again to enter the studio to record the fourth album simply titeld IV released October 2, 2020. Once again the focus has been on great song writing with melodies and arrangements aimed to capture the listener, but this time there´s been a more scaled down approach to the arrangements with no horn or string sections added. The goal was to make a more live sounding album like the classic heavy blues albums of Albert King and Buddy Guy but mixed with influences of contemporary blues masters like Joe Bonamassa, Walter Tout, Jeff Healey, Robben Ford and Gary Moore. The result is a music feast for fans of electric blues, blues-rock, Chicago blues & heavy contemporary blues. 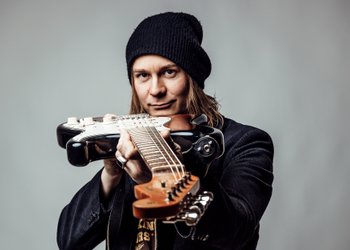 A lot has happened since the start in 2007 and since the first record, and it becomes even clearer when you listen to the new record. It’s a heavier, darker and more mature band you'll be hearing. "I´ve put a lot of time and effort into making this record and I really try to make my music mean something. I try to write songs that make you feel something, songs that matter and I believe we're gotten closer to that goal with every new record and I think you will hear it when you have listen”.